Two of the Best Picture nominees from last weekend’s Academy Awards were British movies Darkest Hour and Dunkirk, two films that portrayed the nation’s much renowned stiff upper lip, as a proud, brave collection of countries that are resilient in the face of adversity. But in the aforementioned productions it didn’t snow. Because when it snows, then we really see how resilient Britain is – as everything seems to fall apart. As you may have seen online – for every single Brit still living on home soil Instagrammed pictures from their window to let the world know we’d amassed about four inches of snow, the past week has been complete mayhem in the UK. It snowed, and nobody knew what to do with themselves.

You see, we’re not very good at coping with snow. I mean, we’re not very good at coping when it’s hot and sunny either, nor when it rains – we like things to be quite mild, much like our manners. I went to Berlin just before Christmas for the European Film Awards, and got wind that back home there has been a very minor snowfall. As a result, my flight back was cancelled and I spent an additional day in the German city, most of which queueing up at an airport vying to book myself on another flight (eventually settling for one the following afternoon via Dusseldorf). I very nearly missed the screening of The Last Jedi, but I made it with a second to spare. Maybe the Force was with me.

Of course when I landed the snow was just pathetic. Barely an inch off the ground, I thought to myself, how does Scandinavia cope? Do all airports just close for 4 months a year? No, they don’t. In Scandinavia they know how to deal with snow. Is Britain uniquely terrible at coping with this particular weather condition? We close roads, schools, and don’t get me started on public transport. So why is this the case? Sadly, much of it is financial. We’re so busy focusing on our billion pound Brexit deal our funding towards transport services is lacking somewhat, and it leaves us wholly unprepared.

Maybe it’s because it doesn’t actually snow that badly that often. So perhaps we should focus our investment on other, more frequent matters – but at the same time, can it excused that we all just shut down for a week every year? London was a mad place to be last week. It felt like Christmas except without the food, time off work, celebrations, presents and kind-natured people. Instead we had to endure Christmas with grumpy strangers, traffic jams, huge queues outside Oxford Circus station, and (sadly I include myself in this) limping idiots who slipped on the ice and had to be helped up by a complete stranger (look, it was really slippery).

So maybe we’re not as resilient as we like to believe. You can bet that in Darkest Hour, the now infamous train sequence in the latter stages wouldn’t have happened. That tube would have been delayed and poor old Churchill would have had to walk to Westminster. In Dunkirk do you really think those boats would have made it across the channel? No chance. With a bit of snow they’d have been held at Dover for a few days until the weather changes. Love to see Christopher Nolan make a movie out of that. 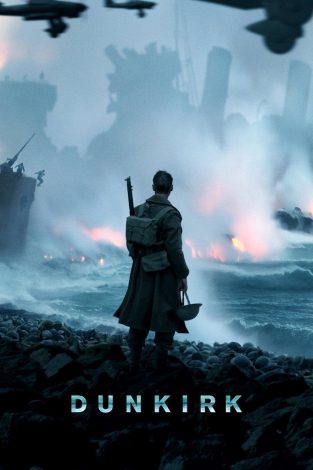