You can never count him out. Never. Count. Him. Out. Just when we all thought we had our contenders locked and loaded for the annual awards season jamboree, a new trailer has dropped and Christian Bale (who else?) has stormed a late charge as Dick Cheney in Vice: Adam McKay’s follow up to 2015’s great ensemble piece, The Big Short.

What is all this hoopla about? Bale slinks inside the slippery skin of one of the most loathed, and yet also the most powerful, Vice Presidents in US history: Dick Cheney.

Refresh my memory. What did he get up to? Cheney sat at the side of George Bush Jr. as he launched the US (and pretty much everyone else in the western world) head-first into the Iraq War on the promise of concealed WMDs by incumbent dictator, Saddam Hussein. As we all know, they did not exist. Cheney also signed-off and introduced the infamous, notorious and ignominious, ‘enhanced interrogation techniques’ (waterboarding and the like). By the time he left office, his approval rating slumped to just 30%. Not a great legacy.

Oh, I remember now. I’m certainly not a fan. Why should I see Vice? As Bale told Variety’s Playback podcast just as he wrapped shooting last year, “People who despise the man are going to go, ‘How dare you say there are nice things about Cheney.’ There absolutely are. What I attempted to do always was put myself in his shoes and not to judge him, but to truly try to understand him, and it’s for Adam to have the bigger perspective. That’s going to make a far more entertaining film with the confusion of really presenting a human there, rather than a caricature.” 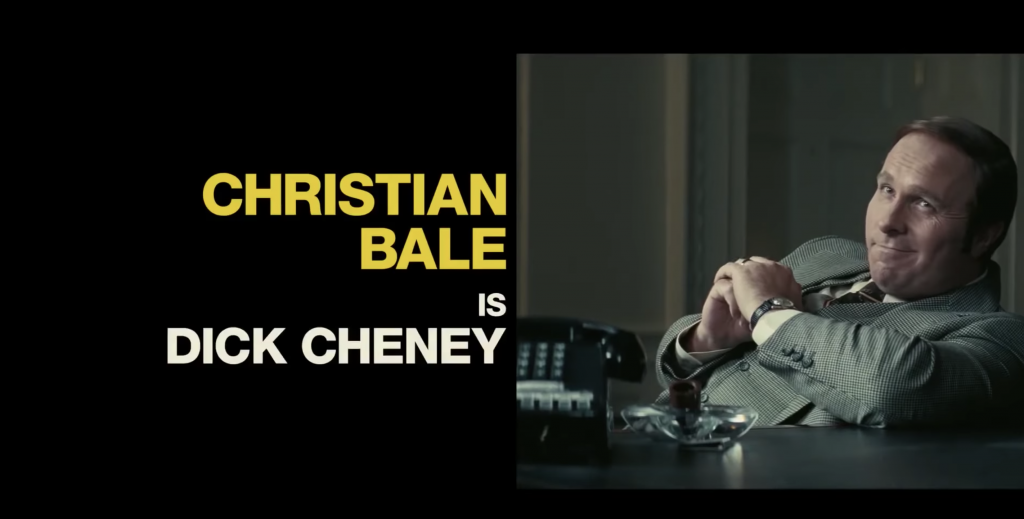 Okay. But another political biopic? Haven’t we had enough of those? We’ve had a fair few, yes, but this one comes by way of the tutelage and steer of a dab directorial hand, Adam McKay. Plus, whilst there have been a number of films that have looked at the polarising figure of Bush Jr, such as Oliver Stone’s W. (2008) and the final strand of Peter Morgan’s ‘Blair Trilogy’ in The Special Relationship (2010), this is the first time we have looked at the controversial VP at his side.

I don’t recognise Bale. Are you sure it’s him? Is this a swizz?! It is definitely him. Christian Bale famously digs deep into the method formula to give his performances that extra little something, seemingly rooted in the belief that veracity is achieved through immersion. This is occasionally at the expense of those around him, as any who observed the explosive onset rant at a crew member for Terminator Salvation can testify. In terms of physical overhauls, he has previously shed the pounds for both The Machinist (2004) and The Fighter (2010). This time, however, it’s more of a Raging Bull De Niro diet as he reportedly piled on 45 pounds, shaved his head and bleached his eyebrows for the role.

He doesn’t do things by halves, clearly. Plus, he was good in The Fighter too, wasn’t he? Yes, he was. He bagged an Oscar for his role. As did Amy Adams. Both are reunited here (Adams plays Cheney’s wife, Lynne). Lest we forget that The Fighter was the first film since Woody Allen’s Hannah and Her Sisters (1986) to secure both male and female Best Supporting Oscars. All involved will be hoping that lightning will strike twice. Vice also stars Steve Carrell as Donald Rumsfeld and Sam Rockwell as Bush Jr, so it has quality bursting out of its celluloid seams.

Stop it! This sounds pretty great. When is it out? You will have to wait for the new year, I’m afraid. Not that long into the new year though. It will be unleashed onto the cinema going public on 25th January 2019.

Ok. Where I can watch the trailer? Here.