A post from Sonam Kapoor’s sister Rhea reveals that the actress’ wedding ceremony is done and that she is now Sonam Kapoor-Ahuja. The photo in the post shows Sonam wearing her bridal chooda with Rhea standing by as chief bridesmaid. Sonam married businessman Anand Ahuja in a traditional Sikh ceremony this morning at her aunt’s bungalow in Mumbai. Sonam Kapoor wore a fabulous lehenga by Anuradha Vakil festooned with a spectacular choker and a necklace along with matching mathapatti (Indian Hair Jewellery) and jhumkis (heavy earrings). 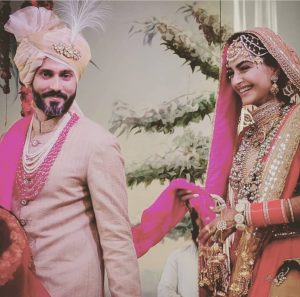 Anand Ahuja complemented her in a gold sherwani with a ruby red mala (red necklace). The groom, a Delhi-based businessman, too looked dapper in a Raghavendra Rathore creation, a beige sherwani. He paired his sherwani with a beige and cream ‘saafa’ along with pearl and ruby strings. Sonam’s uncle Boney Kapoor (Late Sridevi’s husband), along with daughters Janhvi and Khushi, was accompanied by Samajwadi Party leader Amar Singh. Janhvi chose a pink outfit, while Khushi was in a pale yellow attire

A bevy of Bollywood celebrities including Amitabh Bachchan, Aamir Khan, Rani Mukerji, Sonam’s colleagues Swara Bhasker and Kareena Kapoor and her best friend Jacqueline attended the Anand Karaj ceremony in the morning along with the family members. The guest list for the wedding read like a who’s who of Bollywood. Amitabh Bachchan was accompanied by his son and daughter Abhishek and Shweta. 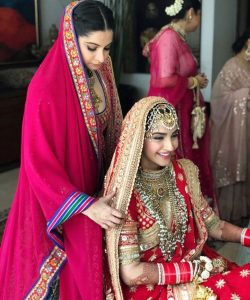 Kareena Kapoor, who co-stars with Sonam in upcoming film Veere Di Wedding, accompanied her husband Saif Ali Khan and son Taimur. Kareena’s sister Karisma, dressed in a Sabyasachi lehenga, did not bring her kids along. Anand Ahuja and Sonam Kapoor are hosting a wedding party tonight. The bash will take place at a five-star hotel in Mumbai and all Bollywood biggies are expected to be at the venue this evening.

What is the traditional Sikh Wedding Ceremony?

“Anand Karaj”, literally, “joyful ceremonial occasion or proceedings” is the name given to the Sikh marriage ceremony. For Sikhs, married status is the norm and the ideal; through it, according to their belief, come the best opportunities for serving God’s purpose and the well-being of humanity, and it affords the best means of fulfillment of individuality and attainment of bliss. Sikhism does not repudiate vows of celibacy, renunciation or the sannyasin state, but it does discourage it and advocates marital life as the best way of living. 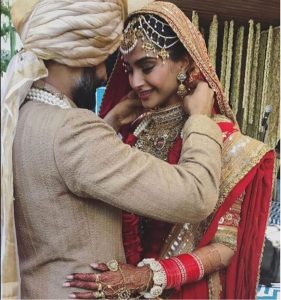 Historically, most marriages among Sikhs, as also in India and Pakistan as a whole, have been arranged. It is regarded as a duty for the parents to arrange for, and actively contribute towards, the marriage of their offspring. Today, it is accepted that Sikhs marry someone they choose themselves. Of course, in order to show respect to their parents, it is best to seek their approval. Traditionally, the parents of the man ask the parents of the woman for their daughter’s hand in marriage.