The graphic novel and comic book fanbases are a notoriously passionate lot. It is a notorious passion that broadly rests on two consistent traits: 1) the exhibition of a loyalty fiercer than you’d find from a mangy old pooch towards its owner; and 2) they tend to also be extremely critical and have no qualms vocalising any criticism (often en masse) from the rooftops with a drum, a flare, a whistle and starter pistol when they are unhappy with something. You may well feel that this description hints at a slightly oxymoronic overview – two conflicting and contradictory concepts – but is a relationship best explained through the metaphor of the relationship between a parent and a child. Whilst a mother or father may face frustration with the behaviour of, say, a recalcitrant teenager, they never relinquish the underlying love for that child.

Which brings us to where we are with Batman: Hush.

Well where are we with Batman: Hush?

Okay, there’s no need to ask us the same question, but you’re enthusiastic, so I’ll go with it. Batman: Hush is the 13th instalment in the DC Animated Universe series, which is one subjected to the New 52 concept of continuity i.e. prescribing to the revamp and relaunch of the entire DC Comics line that took place in 2011. It is also the 35th film overall in the DC Animated Universe Original Movies line with this particular enterprise lifted from the wildly popular and celebrated series of comic books of the same name that were released between 2002-2003 written by industry veteran Jeph Loeb, pencilled by the equally well-versed Jim Lee and inked by Scott Williams.

Why was the original Batman: Hush comic book series so popular?

Tough question and one that’s hard to pin down. It’s even harder to pin down when you are in fear of leaking plot details for this animated outing, but let’s just say that it hit the motherlode in terms of crossing over villains and the relationships within them. There is also a truly formidable nemesis who even manages to entangle Superman in a suspect way. And not forgetting some surprising revelations and tantalising tangents in terms of the love interest between Bruce Wayne and Selina Kyle. I won’t say more here. But you should perhaps be aware of this: Vol. 1 and Vol. 2 of Batman: Hush were voted at #10 on a list of the 25 greatest Batman graphic novels by IGN.

Can you just get into it if you haven’t seen any of the preceding?

Definitely. Fear not. You don’t need a degree from a fandom wiki account to get your brain around the various relationships in this 82-minute jamboree, but you will obviously source more joy (and possibly more criticism) if you are already acquainted with the nuances and vagaries of the platoon of superheroes and alter-egos of this universe.

Now the important bit. Is it any good?

Some fans have taken against this version of Batman: Hush, with the main criticism falling on the narrative sacrifices enforced by the brevity of this animated iteration, and how it cannot do justice to the substance and detail of the lauded long-form comic. There is merit in that argument, certainly, but that doesn’t entirely negate the rollicking chutzpah, fast-paced and heart-racing zip of this edition. It is an old-school animated assault on the senses. Immersive and engrossing, it’s a tasty morsel for newcomers to dip their toes into this rich universe.

Is it out yet?

Yes, it is! It was released today, 12th August 2019. Get involved and thank us at the Hot Corn later. 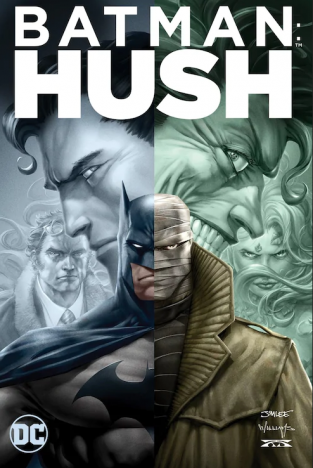