Ask any guy who came of age sometime in the eighties what their favourite films were at the local video shop and chances are one of them will be Walter Hill’s seminal 1979 action adventure The Warriors. They may even go as far as to re-enact that famous line from the film, where the leader of the villainess Rogues clinks together three empty cola bottles on his fingers and begins to bait the titular gang by constantly repeats the line: “Waaaaariors, come out to plaaaay”.

All these years down the line, The Warriors remains somewhat the epitome of cult cinema. Like many films to fall into that categorisation, The Warriors pretty much received a critical drubbing upon release, although the decent box office eased those wounds. But it undoubtedly found its biggest audience via the then newly established home video market, and it has grown in reputation since, perhaps receiving the greatest accolade in 2005 when the characters and their plight were immortalised yet again in a beat ’em up video game for the PlayStation 2 and Xbox (which also featured the vocal talents of many of the original cast members).

Based on a novel by New Yorker Sol Yurick – which itself was cribbed in part from the classic Greek story Anabasis – the film may ostensibly look at urban male tribalism, but it’s far from a hard-hitting expose of that lifestyle. In fact, given the late 70’s, disco-era setting, it’s probably as far removed from any real representation of gang culture as possible. At its heart the film is an unmistakable slice of fantasy action cinema from the decade that saw John Travolta become a fashion icon with his three-piece suit look and an ultra-camp six-piece disco group (all wearing costumes of American cultural stereotypes) storm the charts.

That flamboyant take on fashion permeates throughout The Warriors and a large part of the film’s success is down to the imaginative and eye-catching costume design. Every gang on screen is decked out in their own unique look, and The Warriors themselves are all denim jeans and brown leather waistcoats. But the most outlandish – and arguably iconic – costumes are worn by the Baseball Furies, whose weapons of choice are, unsurprisingly, baseball bats. Kitted out in the appropriate sport regalia, and covering in bright, Day-Glo coloured face paint with big black circle around their eyes and mouths, they’re not the kind of people you’d ever want to run into late at night.

Amongst these distinctive visual touches, director Walter Hill never loses sight of the film’s primal action beats and it’s satisfyingly lean narrative, which see’s The Warriors battling through enemy territory to make it back to the safe confines of their Coney Island home turf. The film’s atmospheric night setting lends a real visceral and gripping quality to the action. The Warriors literally don’t know what lies in wait for them in the shadows or behind any corner. The highly imaginative device of having a late-night female DJ reporting live on the events is a wonderfully resourceful way of informing the audience of The Warriors’ geographical whereabouts without the makers having to constantly resort to awkward and sloppy exposition.

Hill was so enamoured with this jukebox-fuelled fantasy world he created, that he gave it another shot with the equally joyous rock ‘n’ roll fable Streets of Fire, five years later. Both films are a tribute to that keen pop cinema sensibility the director displayed throughout his earlier work, and The Warriors remains his most crystallised representation of that, along with being a fascinating snapshot of US culture from the late-seventies.

Watch The Warriors on CHILI 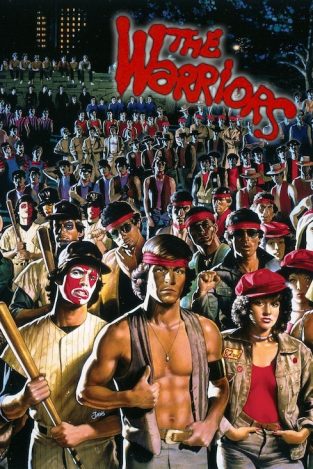