This week marks the cinematic beginning of a new superhero – as DC’s Shazam! makes his way to the silver screen for the very first time, and The Hot Corn had the pleasure of chatting to those who made it possible: sitting down with director David F. Sandberg and producer Peter Safran…

Tell me a little about the casting of the kids.

David F. Sandberg: Sure, the first one we cast was Freddy, because New Line had just done the movie IT and we were like, we have all these great kids, are there who would work in Shazam! and he was perfect for Freddy, because he’s this smart, fast-talking kid, so we cast him first and used him in auditions, to read against other people to see if the chemistry worked. Then for the other kids it was mostly just doing a lot of auditions until we found the right ones. Except for Mary, who I’d worked with before on Annabelle: Creation. But the more time you spend in the casting process to find the right people, the easier your job gets as a director because you don’t have to pull a performance out of someone because it comes naturally if you find the right person.

Your other two movies are horrors, so was it quite nice in this instance to alleviate some of that pressure of not having to scare people?

DS: Yes, but I would say horror and comedy are similar in some ways as it’s a lot about timing and they’re similar in that you get an audible response, which is very rewarding when you’re screening it to people and you can see what worked, and what needs tweaking.

When making this film, were you think about potential future movies at the same time?

Peter Safran: I think we were really looking at it purely as having a great Shazam origin story, and there was no pressure from the studio or DC to do anything other than that, they just wanted to make sure that we had the time and the space and the money to make a really great standalone picture. Clearly there are other stories that can be told, the character and his family have been around for a very long time so there are a lot of stories out there, but for us we were just focusing on just making a great introduction of Shazam to the general market now.

You joked around in the film with different names for Shazam, was that a reference to the original name being Captain Marvel, that you can’t use?

PS: You know, it really wasn’t, it was just a fun thing to do, because this guy, when he gets his superpowers and he becomes Shazam, he’s given no manual, he has no idea what to do, there is no name associated to him at that point, so we just thought it was a really fun through-line to explore over the course of the whole movie. We had hundreds.

Tell me about the magical and fantasy elements in this movie – was that hard to fit in to a superhero movie?

DS: Not hard, but it was important to have the rest of the movie feel grounded and take place in the real world, in a real city, in Philadelphia. Just so it doesn’t feel like everything is too out there, and also that adds to the comedy like you get this superhero in quite a normal world, even if in this world superheroes do exist.

PS: And the magic was one of the fun parts of Shazam, and what really separates it from other superhero movies, so we really embraced that element of the rock of eternity and the eye of sin, and the deadly sins, we love that juxtaposition of the magical, but also the really grounded, real world, foster home, Philadelphia vibe.

How about hiring Zachary? He’s a very funny, engaging and childlike person in real life, but did his casting still represented something of a punt, in that he’s not a huge box-office guarantee. Was there any pressure from the studio to get a bigger name in?

DS: He is a big kid. For us the most important thing was that we needed someone who could pull this off, which is why if you wanted to be Shazam you had to come in and audition, because most adults never play kids so there’s no comparison. We were just looking for a really long time and cast a really wide net, and even actually went out to Zach who turned it down because he thought that he was never going to get the role anyway. Then he sent in a self-tape for a different character and right away it was like, this is Shazam. He feels like a big kid, he has that enthusiasm and excitement of a child, and that’s very genuine. As soon as we saw the tape we knew it would be him.

PS: And it was unusual from a studio perspective, because there was zero pressure. In fact, they really embraced the idea of us not just offering the movie to anybody. Anybody who wanted to be Shazam had to come in and read for it, and it was a luxury to do it like that. Also, because Zach was not already a big star, he brought so much additional enthusiasm because he was so appreciative of the fact he got this role and he knew that he had earned it. So he was the perfect partner with us in telling the story.

We’d been looking for months and we’d seen over a hundred people and not found anybody who really fit the bill, and when he submitted his self-tape he was actually on the East Coast, and he did it on his iPhone and he sent it to us for another role and it was really over the course of a week, and David saw the tape and was like, why is he auditioning for that role? Why won’t he come in for Shazam? So we called his reps and said listen he has got to be here on Monday to come and read and he flew in and that was it, by the end of the week the deal was done and he was cast. We’ve never looked back. It’s hard to imagine the movie now without him, he so embodies that character.

It’s a blank canvas as well, this is Shazam’s first cinematic outing. That must’ve been great for everyone involved, it feels like you were setting the tone as opposed trying to emulate what has come before, which is often the case with superheroes.

DS: Yeah, we got to actually find these actors and we got to set it up. There was no pressure, this wasn’t just a puzzle piece in a bigger picture where we had to fit in references to future films or anything like that, the only focus was to make the best Shazam movie that we could.

Shazam is dealing with so many different powers. What do you think is the most underestimated superpower? And what’s the hardest to capture in the movie?

DS: Well the most underestimated one I would say is probably the lightning power. It’s just for his transformation initially, but he gets a lot of use out of it in the movie. He shoots it into an ATM and he gets money coming out of it. The hardest to shoot was the flying, because like for super speed he would just go fast and we’d move him to the next place, but for the flying they have to be in these very complicated rigs and basically have a bunch of guys puppeteering them. It just takes a long time to not only set it up but to rehearse and choreograph so everyone is in sync with the moves that we want.

How was it having more tools available to you as a storyteller? Of course it’s great to have bigger budgets and have more resources to help tell the story, but at the same time can it over overwhelming? Because there’s infinite ideas you can bring to screen?

DS: I didn’t really see it as that, because mostly it was just like, oh we can come up with all of this cool stuff, and there was actually the possibility to do these things. So I can’t really say there were disadvantages.

The film is very much a celebration of connecting with our inner child, harking back to when we were that sort of age, there’s a lot of nostalgia attached to it. What do you both miss the most about being that age?

PS: And more people see them.

DS: Yeah, more people see them. So my life has just gotten better and better.

PS: The movie is about wish fulfilment right? And for us, people who grew up wanting to tell stories and loving comic books, to be able to actually tell these stories is the ultimate wish fulfilment. So I don’t miss much.

Shazam! is out in cinemas on April 5th 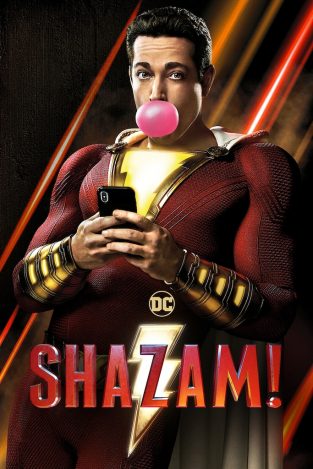