If there’s ever a subgenre which is crying out to be dusted off and repackaged as a well-needed tonic for a modern cinema audience in these dark and depressing times, it’s the gag-a-minute spoof extravaganza. The atrocious laugh-free films of Jason Friedberg and Aaron Seltzer, which include Date Movie, Epic Movie and Disaster Movie – spot the theme? – simply don’t the cut the mustard. Something akin to those offerings from Jim Abrahams and the Zucker brothers (David and Jerry) is what’s required.

The trio broke through as writers on the John Landis-directed comedy anthology The Kentucky Fried Movie before moving into the director’s chair(s) for what has long been considered a veritable classic of the genre, Airplane! (you can watch it on CHILI here) in a pretty unprecedented move for big screen filmmakers back then, their next venture was in TV with Police Squad! A breakneck parody of police procedurals, the show was every bit as endlessly hilarious and comically on the mark as their cinematic debut, yet inexplicably failed to find an audience, lasting a paltry six episodes.

Like many projects which failed to initially take off, in time it developed a loving fanbase. Who wouldn’t fall in love with a TV programme which introduced the guest star in the opening credits before unceremoniously killing them off a few seconds later? Buoyed by the belated success of the misadventures of Detective Frank Drebin (played by king of the comedic poker face, Leslie Nielsen), the trio were inspired to revisit the character and his world on the big screen for The Naked Gun: From the Files of Police Squad, which was released 30 years ago this month.

Retaining most of the original cast of the TV series, with the exception of Mission: Impossible’s Peter Lupus whose character, the bumbling Officer Norberg, was played instead by OJ Simpson – what happened to that guy? – the film was a roaring success. It pulled in almost $217 million at the world-wide box office and inspiring two further films, which although they had their moments, were largely a case of diminishing returns (David Zucker was the only remaining member to stay on board for the third instalment, Naked Gun 33⅓: The Final Insult).

The Naked Gun easily delivers the same barrage of jokes during it’s running time as those gags stuffed into the 25 minute small screen offerings, and the majority of those largely land magnificently. But a film like this lives and dies on the central performance, and Nielsen is on absolute top form here. It’s common knowledge that the Canadian actor’s background was in straight dramatic works like 1956’s Forbidden Planet and the seventies daddy of disaster movies, The Poseidon Adventure, before he was cast against type in Airplane! But prior to The Naked Gun, Nielsen hadn’t been asked to carry such a film.

In his early sixties when the film went into production, it’s a testament to his versatility as a performer just how expertly he glides through the mayhem and ridiculousness in such an expertly impassive manner that it almost borders on genius. It’s that commitment from their actors and the creative trio’s care over their gags and an acute attention to detail which gives the film that timeless, rewatchability factor. If only there was something similar on the horizon for cinemagoers to lose themselves in the laughter for 90 minutes or so. 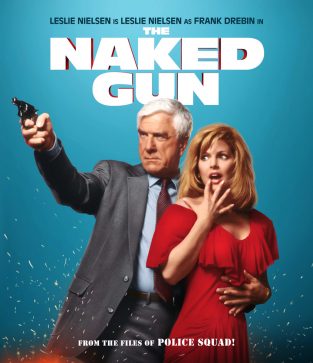 The Naked Gun: From the Files of...