New York is cinema-opolis but for every Woody Allen rhapsody or Harry meeting Sally in Central Park, there’s a Taxi Driver prowling rain slicked streets or William Lustig’s 1980 grindhouse masterwork Maniac. Best of all, there’s Abel Ferrara’s King of New York that captures a 1990 pre-Giuliani New York, with its mean streets in all their sleazy splendour. But as well as a time capsule of that era, the film’s enduring power comes down to the central figure of Frank White, played by Christopher Walken, a fascinating and complex anti-hero.

A notorious drug lord, White has just completed a lengthy prison sentence and is looking to move back up the ranks as swiftly and ruthlessly as possible. Hooking up with his old associates he begins to do just that, although his ultimate aims sit firmly outside the drug business. White sees himself as a community benefactor to the poor inhabitants of the city, whom he seeks to help. A team of no-nonsense detectives (led by David Caruso and Wesley Snipes) are a little less enamoured by his rebirth as a philanthropist, and as the bodies of rival gangs start piling up, some police consider taking drastic action to eliminate their nemesis.

The altruistic actions of White suggest a Robin Hood-like figure, yet the contradictory nature of his efforts are apparent. While he tours the deprived inner-city hospitals to find out which will benefit the most from funding, White’s means of amassing that money is achieved through both the bloody elimination of competitors , and pushing a product which causes prolonged harm to the very citizens he’s trying to help. One of the frustrated cops jokingly refers to White as the ‘King of New York‘ due to his political aspirations. White’s faithful crew of violent hoodlums (including a young Steve Buscemi) also subscribe to his social commitments, and in one fascinating scene, his antagonistic second-in-command Jimmy Jump (Lawrence Fishburne) hands out a fat wad of money to a poor family eating in a low-rent takeaway before he’s pounced on and arrested by the cops.

Occasionally Ferrara’s stripped-down and noirish vision clashes with some of the B-movie elements that work their way into the film, particularly in the unnecessary cranking up of the action in a car chase towards the end that looks like it belongs in the broader exploitation films from that era. For the most part, however, King of New York has stood the test of time and rightly earned its place on that list of revered gangster films – it’s been said that the late rapper Biggie Smalls allegedly used the pseudonym ‘Frank White’ when signing into hotels. With its blistering NY hip-hop soundtrack and memorable turns by a distinguished, New York-centric supporting cast – props also go out to the late Victor Argo, superb as the seasoned detective ill at ease with his colleague’s vigilante plans – King of New York offers a cool return trip through those mean streets once more. 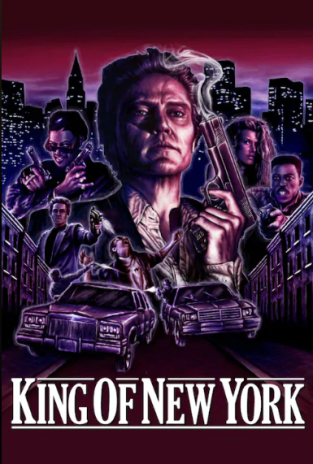