Fifty years ago – on December 21th, 1968 – Sergio Leone premiered his new western Once Upon a Time in the West in Rome. His Dollars Trilogy – Fistful of Dollars, For a Few Dollars More and The Good, the Bad and the Ugly – had been a massive international success, making a star of TV actor Clint Eastwood. For the new film, Leone wanted Eastwood, along with co-stars Eli Wallach and Lee Van Cleef, to appear at the beginning of the new film. They would be waiting at a railway station to assassinate Harmonica (Charles Bronson) and would be outgunned and killed by him, showing that this film was going to be a decisive break with what had come before.

Eastwood nixed the idea – wary of sacrificing his cool invincibility as the Man with no Name – and Leone replaced them with another trio: Woody Strode, Jack Elam and Canadian actor Al Mulock. The filming of the scene was made more difficult by Mulock jumping out of the hotel window one night and killing himself. Leone, reportedly, chased the ambulance to retrieve the costume the dying actor was wearing so the shoot could continue with a standin.

Christopher Frayling related the story in his biography of Sergio Leone: Something to do with Death and it will likely reappear in his forthcoming Once Upon a Time in the West: Shooting a Masterpiece which boasts an introduction by Leone-nut Quentin Tarantino. The tragic demise of the actor is a layer of death on a film which plays out as a requiem, a death mass to a genre and an idea. If Eastwood had paid closer attention, he might have noticed that actually Harmonica is shot in that opening – ‘you brought two too many’ – confrontation. Indeed, there’s an interpretation of the film that sees him as an avenging angel, gradually dying throughout the film.

Harmonica isn’t the only arrival. Former prostitute Jill (a glorious Claudia Cardinale) turns up in the new territory to find her new husband and his family have been murdered by Frank (Henry Fonda), a local killer hired by the railroad boss. Harmonica is after Frank and there’s an escaped bandit Cheyenne (played by then Mr. Lauren Bacall, Jason Robards) who seeks shelter in Jill’s homestead. The film is the most narratively loose of Leone’s Westerns – Bernardo Bertolucci, Dario Argento and Sergio Donati all lend a hand in the writing process.

The characters are placed in the iconic landscape of Monument Valley, surrounded by Western tropes, and then left to simmer. This is because the real story is happening in the background as the railroad makes its indomitable progress through the West, bringing with it civilisation and modern capitalist America and effectively ending the West as an idea of freedom and as a genre. There are other ‘end of the West’ westerns – The Wild Bunch and Unforgiven spring to mind – but there is no ‘blaze of glory’ ending to Leone’s masterpiece.

After Ennio Morricone’s luscious elegiac score of the opening sections, we are left with a death rattle played on a dusty harmonica. Leone would go on to complete two more films – Once Upon a Revolution (AKA Fistful of Dynamite, AKA Duck, you Sucker!) and Once Upon a Time in America. Despite their different settings – revolutionary politics and prohibition gangsters – they’re united by an overwhelmingly melancholy sense of betrayal. It seemed that something important died with the West.

You can watch Once upon a time in West on CHILI here.

Here’s the Ennio Morricone’s main theme from the film: 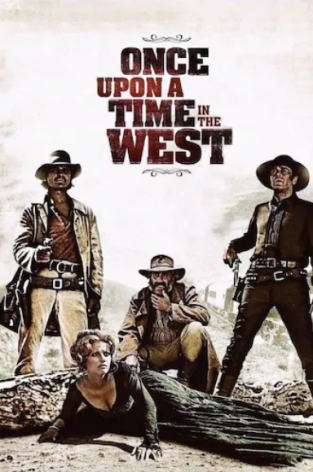 Once Upon a Time in The West