Rain Man is 30 years-old this week. Or if you’re the film’s titular protagonist Raymond Babbitt, that’s 1,564.29 weeks or 10,950 days. Barry Levinson’s multi Oscar-winning road movie dramedy doesn’t get much of a look-in nowadays, but it’s a beautifully acted and emotionally rich two-hander – the kind of low-key, finely observed family drama which is becoming an increasingly rare sight in Hollywood cinema. Aside from all the accolades, Rain Man also went on to become the highest-grossing domestic US feature of 1988. Can you imagine such a film in this era getting anywhere close to cracking the year’s top ten?

Rain Man also has the distinction of being one of the early examples of a mainstream feature tackling the subject of autism. While the film may have been accused of misrepresenting the condition somewhat by suggesting that possessing savant skills automatically went hand-in-hand with being on the autism spectrum, the fact remains that helping raise awareness of the disorder amongst cinemagoers three decades back was undeniably a positive thing. Co-writer Barry Morrow is said to have based the character of Raymond on two real-life figures, one of whom is was very close to. The character certainly crackles with an authenticity, helped immeasurably by Dustin Hoffman’s committed turn.

Playing a character with an affliction has traditionally been a popular go-to for many big Hollywood stars, presumably for both the challenges involved and that potential awards bait those roles can attract. While Hoffman received the Best Actor statuette for his work here, it’s to the actor’s credit and his strengths as a performer that it never feels like he’s showboating, and he disappears into the role as soon as Raymond comes shuffling into the world of his younger brother, Charlie (Tom Cruise). Incensed that the majority of his late father’s $3 million estate has been awarded to a mysterious trustee, Charlie digs around to discover that the recipient is in fact his older brother whom he had no idea existed. Attempting to gain custody of Raymond sets in motion a cross country trip the pair have to undertake.

The film’s script drummed up a considerable amount of interest during the development stage, with the likes of Martin Brest, Sydney Pollack and even Steven Spielberg toying with signing on. Barry Levinson – who would eventually take on the directorial reins – was hardly a neophyte filmmaker, with the likes of Good Morning, Vietnam, baseball epic The Natural and Diner under his belt, but winning the coveted Academy Award for Best Director, it certainly position him up there near the top of the Hollywood A-list.

Looking back, it was perhaps the perfect choice for the film. Something of a journeyman director, Levinson never lets his personality get in the way of the story in the way someone like Spielberg may have. For him, it’s all about the brother’s literal and emotional journey, as he largely avoids any sentimentality which could have so easily crept in, given the subject matter. 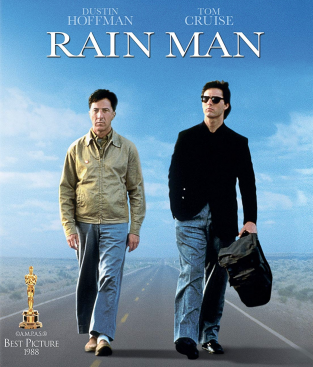