Romantic comedies can be a hard nut to crack, but Garry Marshall did a commendable job when releasing Overboard back in 1987, starring Goldie Hawn and Kurt Russell in the leading roles. As with many films that exist within this genre, there’s an inclination to find an outlandish scenario to place our romantic protagonists, hoping they can fall in love in the face of adversity. In this instance, Hawn played a cruel heiress who mocks her lowly carpenter, played by Russell. After she gets amnesia he decides to bring her into the real world and convince this vulnerable woman she’s actually his beleaguered spouse.

Now the film has been remade by Rob Greenberg. Why I hear you ask. I’m afraid I have absolutely no clue. The difference here is that the genders have been reversed, and in this instance Leonardo (Eugenio Derbez) is the rich asshole, and Kate (Anna Faris) is the working-class single mother. You can see why they’ve swapped the roles of the two leads, for it’s somewhat problematic in this contemporary climate to have a narrative whereby a man is preying on an ill woman just to make himself feel better. But then, by the same token, isn’t it still an issue the other way round?

To be honest, when indulging in this quite absurd piece of cinema, its ethical stance becomes something of a side-note, for it’s far easier to be distracted – and subsequently offended – by just how poor the feature actually is. There are so many plot holes in this film you could use it to drain pasta. And the characters are just so immensely unlikeable. Let’s start with Leonardo. Yes, he comes good. He grows to be endearing as a father to kids he thinks are his own, and adheres diligently to the struggles of a working-class livelihood. But he has amnesia. The real Leonardo is a brute. An affluent womaniser who has spent his entire life being horrible to people. Sorry mate, but a knock on the head isn’t going to absolve you of that horrible past.

And then we have the film’s supposed hero, Kate. In her defence, Leo was horrible to to her. He was rude and obnoxious and used his affluence as a means of domination, and she shouldn’t have been subjected to such behaviour. But to trick this poor guy into believing that he’s her husband, to allow him to connect with her children is just outright sociopathic. And she lets her kids into the secret, these three young girls have to try and comprehend the fact their mother is a star-raving lunatic who will stop at nothing to get some petty revenge. They have no hope for the future.

Sadly, we’re then left without any character to emotionally invest it, and to actually like. The lacklustre acting doesn’t help much either, as it’s fair to say that Faris is actually better in the Scary Movie franchise, except the difference is, those films are sort of purposefully bad. Tonally it’s an odd one too, it’s almost quite juvenile, as though a romantic comedy for all the family to enjoy, in spite of the themes being explored. Though good luck finding a family who’ll like this one. Perhaps dear grandma who is hard of hearing may be the best bet.

On the plus side (yes, there’s always a plus side) – thee film is very easy to sit back and watch. It requires little from the viewer, it’s throwaway entertainment, and though a film you would quite like to actually throw away, there’s always room for films of this nature, the sort you just stick on at home when nothing else is on, expecting to watch for a couple minutes, and next thing you know an hour has passed an you’re sort-of-enjoying it. Unlikely, but you never know. 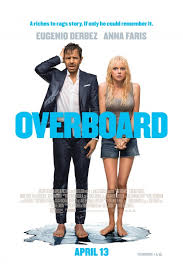