Some iconic scenes in cinema can run the risk of being diluted, and worst still, lose all their power after they’ve been successfully parodied. Ask anyone familiar with Peter Weir’s fish out of water cop thriller Witness what they remember most about the film, and chances are they will cite the barn-building sequence. Although it was mercilessly mocked in the Farrelly Brothers’ movie Kingpin, it’s to the ultimate strengths of the film that the scene – which is a rousing piece of cinema enhanced immeasurably by Maurice Jarre’s towering score – remains intact and hasn’t succumbed to being a jokey afterthought.

In fact, the entirety of Peter Weir’s first American feature is still a powerful and sympathetic commentary on the clash of cultures, and features perhaps Harrison Ford’s finest performance of his career. He’s a cop who is forced to flee the city with a young Amish child and mother when the former is witness to a brutal killing with has implications of police corruption. For audiences versed in the actor’s most popular roles at that time, seeing Ford shorn of his bullwhip or blaster and in a contemporary earth-bound setting must have been initially a little jarring. However, he slips effortlessly into the role, and any of that baggage he may have ostensibly brought falls away almost instantly.

The film’s script – by Earl W. Wallace and William Kelley – resembles a modern western at times. The wounded Book being taken to an insular and wary Amish community – far removed from his own and one which has to rely on a very dated way of living – could almost be a Federal Army infantryman seeking refuse within a hostile Sioux village. The film’s final act, where (spoiler) Book’s crooked colleagues turn up to the farm he’s been holed up in, firearms a-ready, even uses some western iconography in the sweeping countryside vistas the three men are framed against.

But ultimately, aside from the obvious thriller machinations, Weir sculpts a very credible and at time, erotically-charged, illicit romance between Book and his Florence Nightingale-like carer, Rachel. She’s played refreshingly vanity-free by Kelly McGillis, a fine actress whose self-imposed semi-exile from Hollywood decades back was a genuine loss to the industry. A widower – her husband’s wake acts as the opening for the film – Rachel’s forced closeness and intimacy with the outsider stirs in her a longing which she’s kept suppressed all her life, due to her unconventional upbringing and the staunch religious views imparted on here.

Weir juggles these disparate elements perfectly and with the same assuredness and skill he’s brought to all of his work, be it the exploration of the Australian psyche masquerading as horror comedy (The Cars That Ate Paris), or the notion of identity and conformity via social satire (The Truman Show). In many ways, Witness remains one of his least showy and most restrained works, and it’s all the better for it. When the aforementioned barn-building arrives somewhere midpoint in the film, Weir is able to conjure up a strong sense of community and the collective resourcefulness of the Amish people in a deceptively simple montage which speak volumes of his talents as one of Hollywood’s great storytellers. 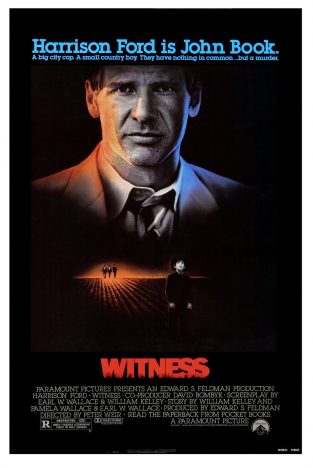