In July 2016, Leonard Cohen sent a message to his former girlfriend and muse, Marianne Ihlen, as she lay on her deathbed. In the brief and immensely tender missive, he managed to pack in musings on love and death and the importance of Marianne in his life. When Cohen died just three months later, the singer’s email went viral and the erstwhile couple’s love story hit the headlines. Moving on to July 2019, Nick Broomfield’s documentary Marianne & Leonard: Words of Love takes a loving look at that relationship. Broomfield takes us to the Greek island of Hydra, an idyllic haven for poets, artists and writers. It’s 1960 and the young Leonard Cohen is trying to write his novel. Marianne is also on the island, having arrived with a husband and baby in tow. Her husband Alex has decided that an open marriage is what he’s after, leaving Marianne alone to fend for herself and the infant Alex Junior. Despite the physical hardships of the island, the expat gang of scribes and artists along their entourage of partners and kids, as well as such glittering guests as Jackie Kennedy, enjoy the many pleasures afforded by their life on Hydra.

Yet Broomfield is keen to whip the rose-tinted glasses from our eyes and while he portrays the romance of that hedonistic life, he also focuses on the emotional fallout: the partner-swapping, LSD-licking, booze-addled adults left their children to their own devices and did little to protect them. As a result, Alex Junior is now in a mental institution while two of his three ex-neighbours and playmates, the children of Australian writers George Johnston and Charmian Clift, died of alcohol abuse and suicide. Suddenly, that seemingly halcyon life on Hydra doesn’t look quite so sunny.

But back to the titular lovers: Cohen’s novel was bashed out on a typewriter in the blazing sun while Ihlen provided sandwiches and support. After the book was released to scathing reviews, Cohen sank into depression and it was Ihlen who gently pushed him in the direction of a musical career. Her guidance led to Cohen’s stratospheric success and the downfall of their relationship, for as his time away from the island increased, so did his opportunities to bed countless adulating female fans. Broomfield has unearthed some of the flirtations caught on film, which make for entertaining if voyeuristic viewing.

When Cohen invited Ihlen to New York, her visit proved to be a decisive nail in the coffin of their relationship. We watch as Ihlen heads back to Norway and a regular life while Cohen went on to perform his 1967 hit So Long, Marianne for the next forty-odd years. The film is full of wonderful grainy footage, both of the couple on Hydra and of Cohen as we follow him from shy songster to Buddhist monk and onto the consummate showman of his latter years. There’s even a snippet of an older and still beautiful Marianne singing along in the audience at one of his septuagenarian-era concerts.

Broomfield is the perfect man for bringing this doomed romance to the screen, for not only does he have scores of excellent docs to his name, he actually met Cohen and was also Ihlen’s lover for a time, having arrived on Hydra as a young law student. And like Cohen before him, he has Marianne to thank for setting him off on his new career path. In a recent interview, Broomfield mentions the importance of placing Marianne’s name before Leonard’s in the title to show that she was an equal in the relationship and not a mere appendage in Cohen’s life.

The notion of muse might make modern viewers uncomfortable, but Marianne comes across as a born nurturer and very comfortable with her role. In no way does she appear to be a victim, despite Cohen’s often extremely shabby treatment of her. This film opens and closes with that famous love letter and is itself a love letter to Cohen and more so to Ihlen, and to their extraordinary affair, the aftershocks of which reverberated throughout their long lives. So long, Marianne; so long, Leonard. And thanks, Nick Broomfield, for one of the best love stories of the year. 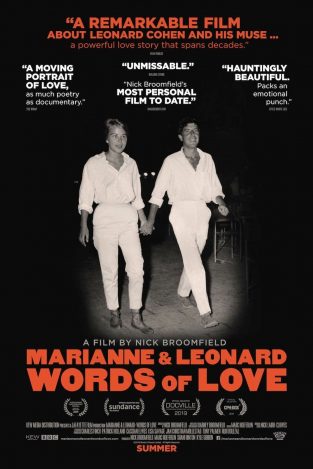