Lorenzo Crestani 12th December 2018
ShareTweet
NEW YORK – A biographical comedy-drama written and directed by Adam McKay, Vice stars Christian Bale as Dick Cheney and Amy Adams as her wife Lynne. As well as Steve Carell and Sam Rockwell in supporting roles. The plot explores how a bureaucratic Washington insider quietly became the most powerful Vice-President to George W. Bush in America’s history, reshaping the country and the globe in ways still felt today. We were at Robin Williams Center attending a Q&A with Adams and McKay. 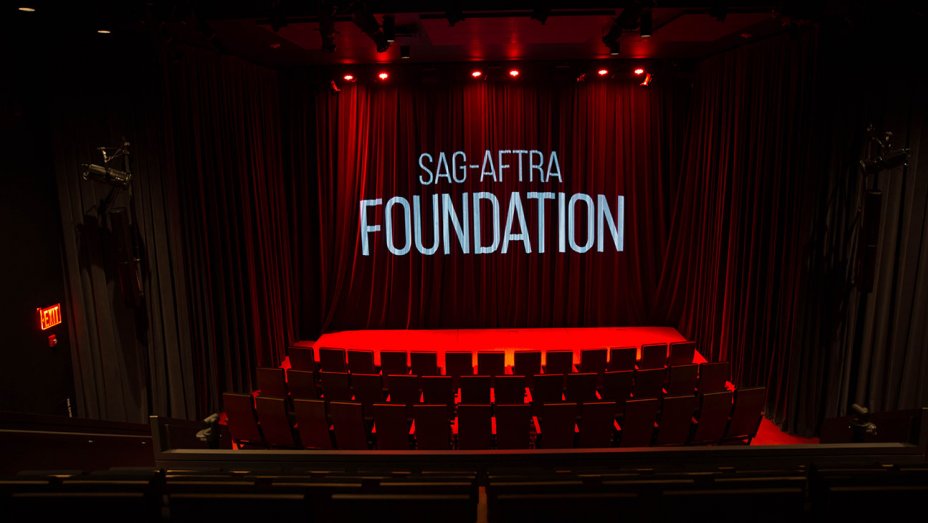 Adam McKay: “Casting is essential in every movie but there’s a mystery at the center of this film. Dick Cheney is a huge enigma and when I discovered that also his wife Lynne was such a big part of the story I really needed actors that I knew they’re going to go on that mystery with me trying to figure out who these people were. When you look at that list you come up pretty quickly with names like Amy and Christian. They took on the challenge and the actors really ended up informing the movie as we went through it in a way that I’ve never experienced before.” 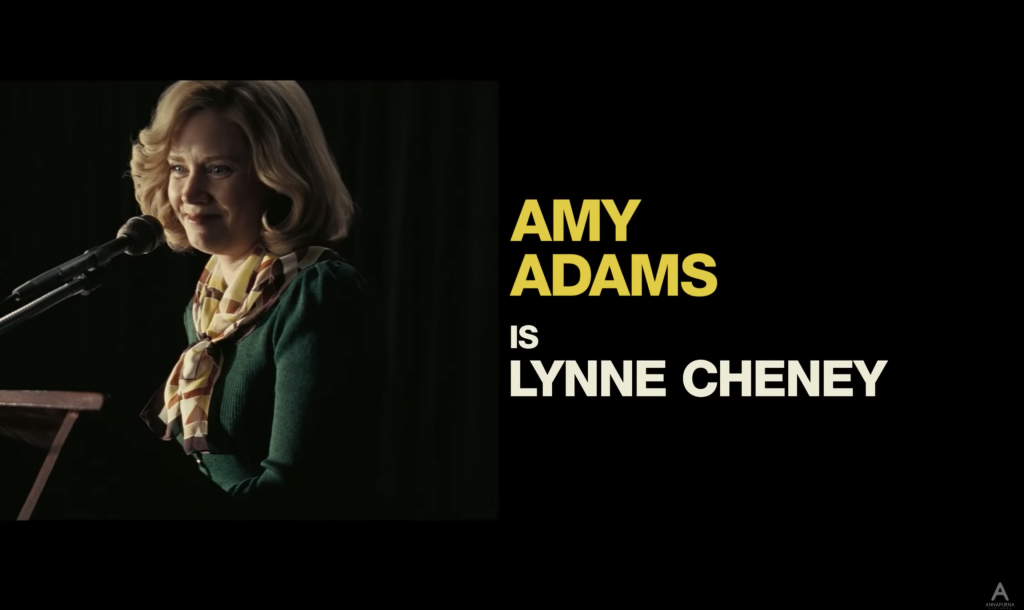 Amy Adams: “I didn’t really know a lot about Lynne Cheney when I began the process so it was a wonderful discovery. All I knew about her were people’s opinions of her so it would have been easy to go in with this judgment of other people’s experience of her and her opinions which she shares quite openly. When I started to research I was lucky enough she wrote an autobiography talking about her childhood and it gave me a totally different perspective. Suddenly I thought Lynne was my grandmother, she became very personal to me. I think I was having a personal relationship with a character like her who on the surface is hard and hard to get to know, while on the inside you start to understand her motivations and love of country and family. That allowed me to a different perspective of a woman.”
Amy Adams: “She wasn’t afraid to state her opinion, which allowed people to identify with her who shared the same opinion. It was that sort of pioneer spirit that was really recognizable to me. You can’t get Lynne off her feet, as hard as you push she’ll always stay grounded.”
Adam McKay: “I like when you say ‘She’s hard’ because my grandmother was the same way and I think it’s an important part of this movie, there’s a heritage and history to America that does infuse where we are now that is key to the movie . Amy brought this tough Americana middle of the country edge. Her motivation was what I love about Lynne. All her heroes were her high school teachers who were the only women she knew that were working. It’s heartbreaking to know that this is what it was. Her dream along with Dick was to become college professors so I feel that if she had been born 20 years later, she would’ve been a very famous senator or governor. There’s a sense that Lynne’s special person is not allowed to blossom.” 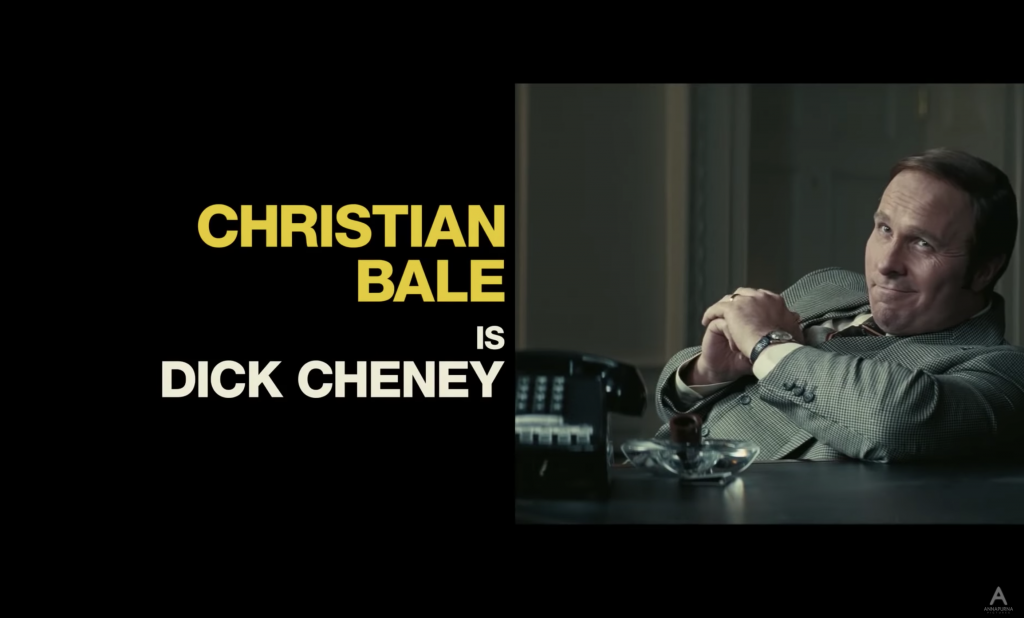 Adam McKay: “This is the real treat of working with actors like him, nothing is accidental. One of the major things about Cheney is that he has a tension in the right side of his jaw and Christian figured out what that was and he said ‘that was Cheney getting in bar fight and drinking as a young man and Lynne told him to stop so it all went in his jaw’ and I thought that was effing genius. Every gesture you see in the movie is not by accident. Everything’s based on character and there’s a great moment when Rumsfeld (played by Steve Carrel) makes a joke and Christian sits forward, which is exactly what Dick does when angry (Christian found it in an interview). It’s very fascinating seeing these actors operate at that level of perfection.” 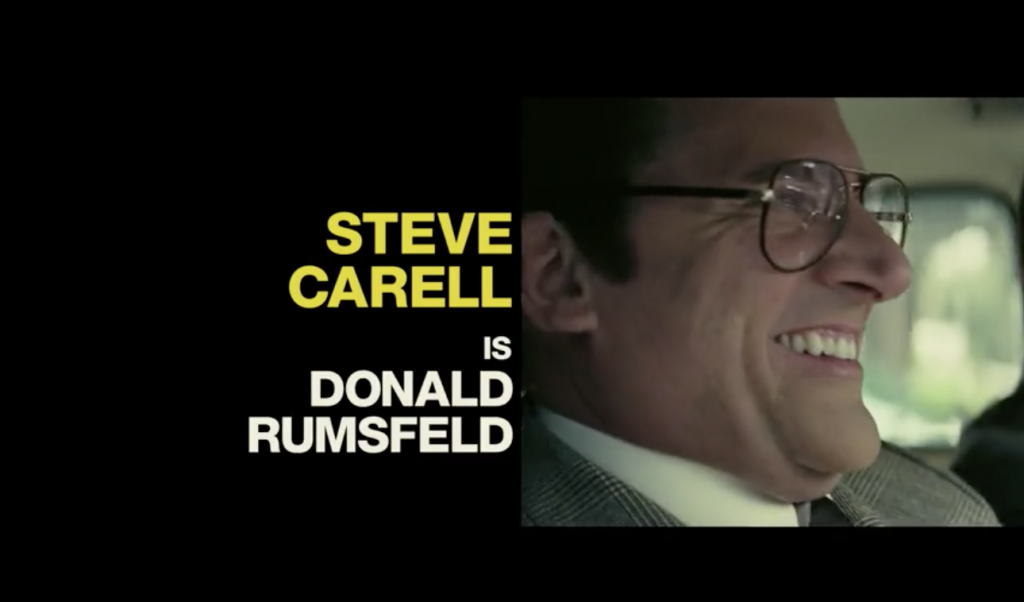 Adam McKay: “Rumsfeld is very funny because he’s so obvious. You can listen to all the Nixon’s tapes in which Nixon and Halderman talk about how horrible Rumsfeld is and then Nixon says ‘I don’t know, I kind of like him.’ His entire career Rumsfeld always had his cards pointed out, he was never hiding anything. One of my favorite moments, which is also a character defining moment (that’s not from Carrel), is when Amy is in bed with Dick and Rumsfeld lost his career and Lynne says ‘Tell Don we’re not moving just cause everyone hates him in the White House.’ That’s Rumsfeld.” 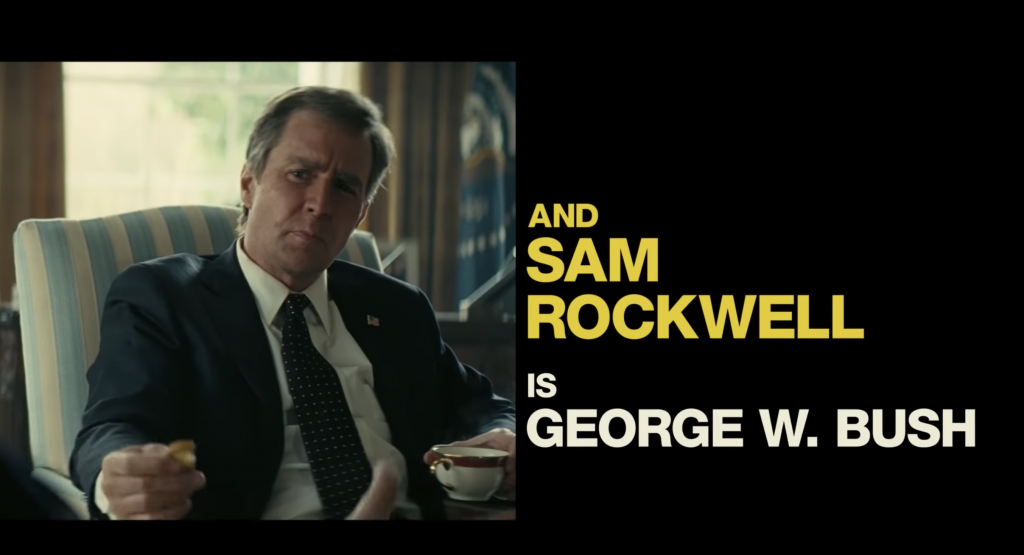 Adam McKay: “I think Sam had one of the hardest jobs because he had to stare in the face of Will Farrell’s impression that’s so ubiquitous. When I sat down with Sam I just said ‘You have a really hard job here because we’re not doing impersonations but impressions. We want to reorganize the character but you have to deal with Farrell’s impression.’ George W. Bush is a funny and odd guy. His first job after he left Yale was selling tropical plants, he has a ten-years gap in his resume where he didn’t work at all, he just lived in a Houston condominium and partied, he’s really a character. As I director I’m spoiled when you have people like Sam come in and just find this human center to W. Bush where you feel bad for him.”
Amy Adams: “Just impersonating a character people have an opinion about and trying not to get caught up in your own opinion. Clear yourself and be present in the moment of what is needed in the scene. Working with Christian, even if it’s challenging it’s a gift. Adam encouraged us to take things as far as we could do. I really felt I stretched what I was comfortable going inside of a character and letting go of likability, which for me as an actress is something that I always aim to do. I feel like often male characters are allowed to be unlikable and people like it but if a woman is unlikable people get disappointed. In that moment creating a reality and an understanding of Lynne made me learn so much on set about investment and research.”
[inserisci trailer=’vice-official-trailer’ display=’title’]