Keep the motor running! With Ford v. Ferrari currently in the movie theatres, here are five more films about the world of car racing you can watch on CHILI.

STEVE MCQUEEN: THE MAN & LE MANS – Steve McQueen was not just as a bad boy from the wrong side of the tracks, but a phenomenal driver on one. Having leapt barbed wire fences on a stolen motorbike in The Great Escape and been the protagonist of one of the greatest car chases of all time in Bullitt (though a stunt driver stood in for him on the main chase), McQueen was the ultimate petrolhead. By making Le Mans in 1971, the actor was trying to regain control of his image and his career, combining his two loves in one film. Alas, it flopped, but this documentary about the making of Le Mans is an entertaining and often compelling look at the blue-eyed actor behind the wheel and behind the camera. Narrated by his son and with interviews with McQueen’s first wife, the doc contains great footage of both the race and of the actor in private moments.

DAYS OF THUNDER – The first of three films they would make together, Days of Thunder stars Tom Cruise and Nicole Kidman: he’s a budding NASCAR driver Cole Trickle and she’s a – wait for it – neurosurgeon called in to treat Cole and his driving rival after a crash. This is just one of many hard-to-swallow plotlines, yet what Tony Scott’s film gets right are the roaring action sequences. Starring real-life NASCAR drivers and with Cruise in his element performing many of his own stunts, it’s best to focus on the driving, though Robert Duval adds a touch of class.

Watch Days of Thunder on CHILI

CARS – So many race-car movies are about the men on the track and their troubled relationships off it (think Paul Newman and Joanne Woodward in Winning) that it’s nice to see humour behind the wheel every now and then. Herbie and The Great Race are part of this fine tradition, while Pixar’s Cars takes us into the realm of animation. Starring Owen Wilson as Lightning McQueen (the car’s name and blue eyes a homage to the Hollywood actor), the film follows our little red hero on the road as he creates unlikely off-piste friendships. In Radiator Springs on Route 66 he meets Doc Hudson (voiced by that other great race driving star Paul Newman in his final role). This was to be Pixar’s final independent film before being swallowed up by Disney.

RUSH – Formula One has provided many rivalries over the years, but none more riveting than the one between Niki Lauda and James Hunt. Ron Howard brings their story to the screen with Daniel Bruhl and Chris Hemsworth as the battling drivers. Lauda is all icy concentration whereas Hunt channels his inner rock star and the two are like chalk and cheese, but for their brilliance on the race track. The film focuses on Lauda’s infamous crash and his return to racing, as well as Hunt’s own car crash of a life, including his drinking and adultery, though Lauda is not without his own demons. The film is sympathetic to both men and Peter Morgan’s script allows the grudging regard the men have for each other to seep in. The race scenes are nail-bitingly good, particularly the rain-soaked race at the end which offers plenty of thrills.

SENNA – First there was the Hunt-Lauda rivalry and then there was Senna- Prost. Asif Kapadia’s mesmeric documentary about Ayrton Senna, who died aged 34 in a crash, was criminally overlooked at the Oscars yet remains one of the best movies about car racing ever made. There are no interviews with old rivals here, no talking heads; just the beautiful Brazilian driver in archive footage. We watch the races, the danger and the foolhardiness, the dazzling driving and the inevitable crash and burn. Almost every other film above deals with the obsessions behind drivers’ desire for speed and victory. Kapadia displays that obsession here through the life and premature death of one of the greatest. 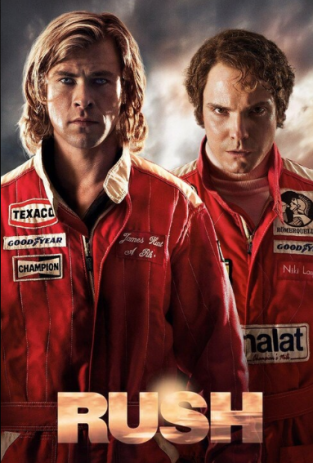