LONDON  – More often than not, press conferences take place in fancy central London hotels, but in the case of 1917 – the new single-take First World War movie from Sir Sam Mendes, we head, fittingly, to the Imperial War Museum to celebrate this excellent piece of cinema. The line-up sat in front of us featured a host of incredible talents from both behind and in front of the lens. Sir Sam Mendes was there, alongside co-writer Krysty Wilson-Cairns and producer Pippa Harris, while Roger Deakins – the esteemed cinematographer was also in attendance.

From the cast we had George Mackay, Dean-Charles Chapman, Mark Strong, Andrew Scott, Daniel Mays and finally Claire Duburcq. To kick things off, Mendes (who wasn’t a Sir at the time, but has seen been granted such an honour) told us why he had apprehensions about delving into the First World War, and what it was which convinced him that he had a movie here. 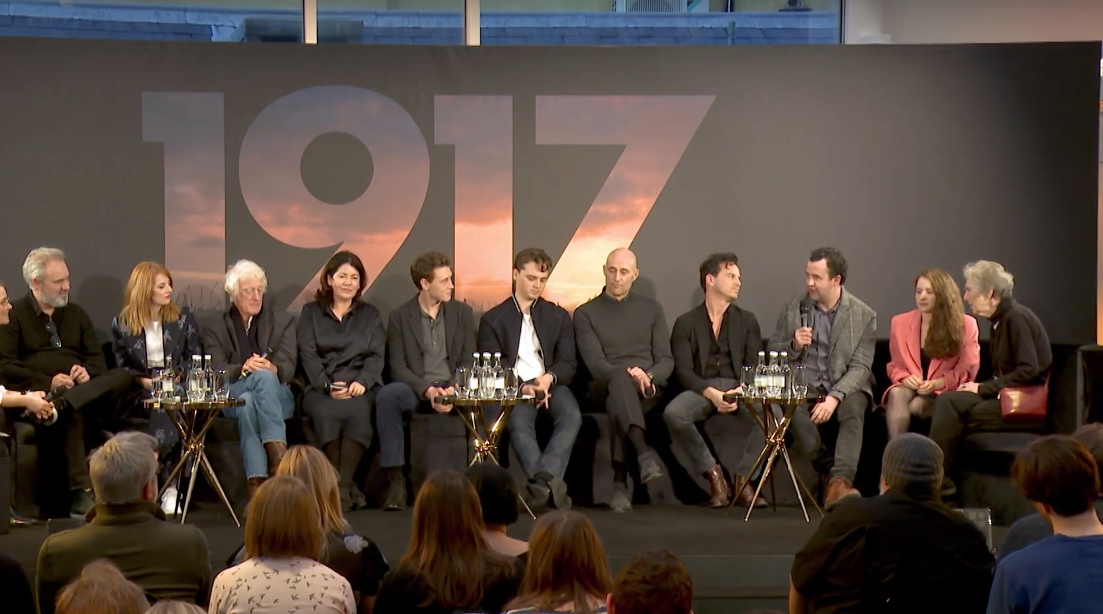 “The problem with the First World War is that it’s a war in which hundreds of thousands of people lost their lives over a tiny stretch of land, so carrying a message didn’t seem to be a valid option,” Mendes said. “So it was only when I started researching, and I actually came here, and I found this time in 1917, a very specific moment that Spring, when this land they were fighting over was abandoned and the Germans destroyed most of what was there. There seemed to be a story to tell of this journey, and that was the moment I thought, I can write a film. Because at least 90% first person accounts from the war are things like the Somme, which is only a hundred yards of land. One of the reasons I think the First World War is not represented in the movies as much as the Second World War, is that the very nature of the War was quite static, so when I found out there was a journey they could take, that was when I started writing with some enthusiasm.”

What also makes the film unique, is the fact it purports to be one long take, and while there are a small handful of cuts, the film is thrilling and captivating due to this artistic decision, and even though cuts exist, the scenes we do see are incredibly long. Roger Deakins admits that he thought this was a typo when he first read it, but since came round to embracing the challenge ahead. 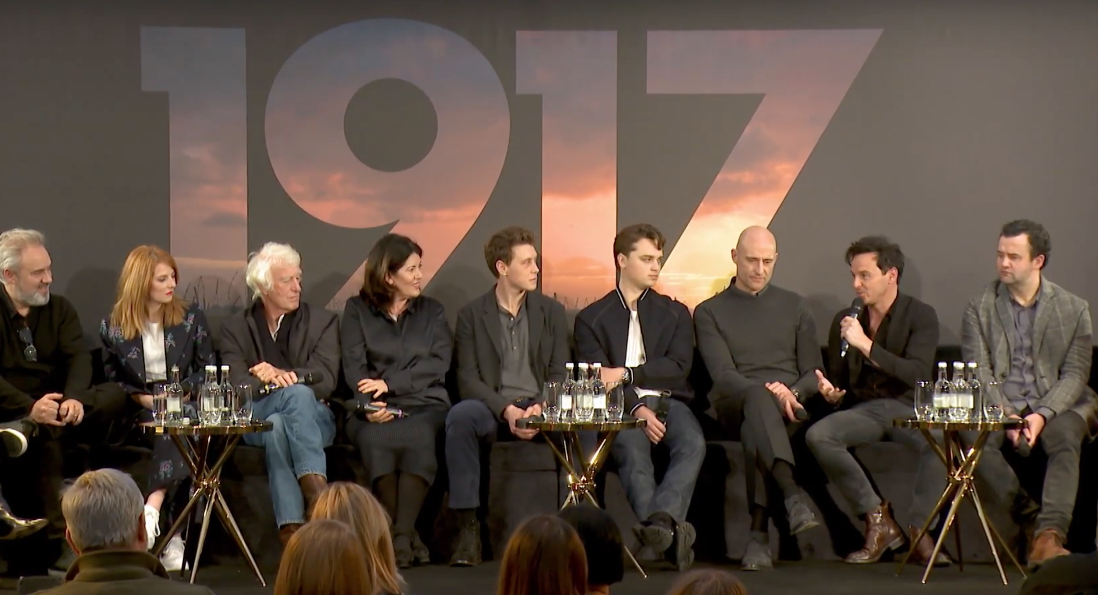 “He sent me the script and on the cover page it said his vision was as a single shot, and I looked at my wife and said, that must be a typo,” Deakins laughed. “Was it make-able? I don’t know. I don’t think it was until a few days before shooting when we figured everything out, we felt it was make-able by then. We did a lot of rehearsing and a lot of testing. But I don’t think I’ve had as much anxiety doing some shots as much as I did on this, but also the thrill, because after some of the shots which are seven or eight minutes, at the end we’d all look at each other and give each other high fives, it was a real high.” What comes with the territory of shooting a film in this style, is that mistakes can be hugely irritating, for if you’re in the seventh minute of an eight minute sequence, any wrong move, and everybody has to start from scratch. When asked who made the most mistakes, well, it seemed poor Andrew Scott was the answer. 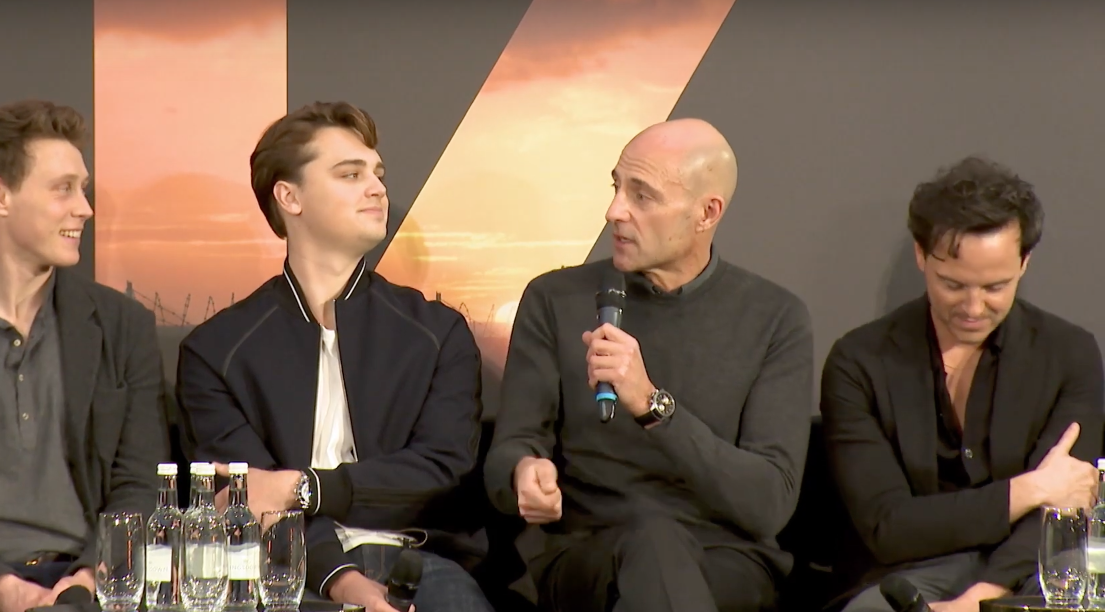 “The challenge was that you didn’t want to mess it up, you didn’t wanna be that guy,” Scott said, sheepishly. “If you’re doing a shot that is six minutes long, and you make a mistake in minute four or five, we had to start right from the beginning.”

“You can have seven minutes of magic and then if someone trips, or a lighter doesn’t work, you have to start again and none of it is useable,” Mendes added. “There were days when we thought, why are we doing this to ourselves? But it was the only way to work. But there were some really tough days.”

A lighter, he says? Well, as Scott followed, “Never smoke, never smoke, in anything. On stage or on film, never use a cigarette lighter.” Think we know who was behind those mistakes.

Scott is one of many actors with very limited, yet essential screen time, with the challenge of coming into this epic production for a mere matter of minutes, and leaving an indelible impression (something he more than delivers). Finally, when Mark Strong was asked about the difficulty in a role of this nature, he said: “Coming into it was quite daunting as you only had a couple of days, I literally just played my sequence and once it was done, it was over. There wasn’t a lot of days involved, a very quick in and out, so I had to be right up to speed. To do that difficult thing that all actors find, which is coming into a shoot halfway through and just get on the same page as everyone else, but it was an amazing experience.”

1917 is out in cinemas across the UK now 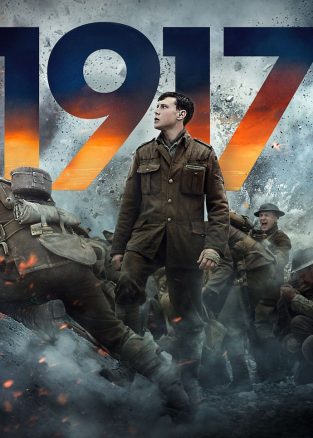