Following the hugely successful release of Shakira’s album El Dorado – which eventually earned her a Grammy for Best Latin Pop Vocal Album and a Latin Grammy for Best Contemporary Pop Vocal Album – she returned to the world stage with her most celebrated show yet, performing recent smashes such as “Chantaje” and “La Bicicleta” as well as hits from her 20+ year repertoire including “Hips Don’t Lie”, ‘Waka Waka (This Time for Africa)” and “Estoy Aqui”, to sold out stadiums and arenas across the planet.

Shakira In Concert: El Dorado World Tour relives the larger-than-life show on the big screen and, through documentary footage and Shakira’s own words, highlights what it took to bring the career-highlight show to 22 countries and nearly a million fans, following the drama of having to postpone the entire tour due to a vocal cord injury. 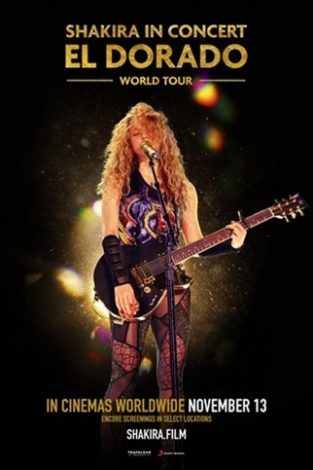